I have seen a ton of users are reporting on different forums that after they have Jailbroken their device running on iOS 13. It seems iMessage and AppStore start behaving abnormally. So I started digging more about iMessage and AppStore Issues after Jailbreaking iOS 13 and it was true. After Jailbreaking iOS 13, a number of users reported this same issue. So I thought why not help you all and provide you with some workarounds that will help you fix iMessage and AppStore Issues after Jailbreaking iOS 13.

So before I move on and tell you what you have to do fix these issues. I need to shed some light on the iMessage and AppStore Issues. Apparently, there is a glitch or a bug that is effecting App Store and iMessage workings. For e.g, Once you have Jailbroken your device, there will be no app update for you. App Store won’t show you a single update of any app unless you UnJailbreak your device.

There you go now you have a better picture of all the issues people are facing after Jailbreaking iOS 13. Let’s get going and fix these issues.

Since iMessage and AppStore started behaving abnormally after the Jailbreak. The first thing that comes to our mind is Un-Jailbreak our device. I also agree with you all, this is what we all should do. But, I think, this should be our last option.

I have found some potential solutions to Fix iMessage and AppStore Issues. But I do need to remind you that these workarounds will only work on a Jailbroken device. If you still want to keep Jailbreak on your device then you try the following solutions.

Otherwise, you can Un-Jailbreak your device whenever you like. 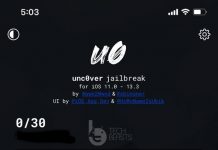