Before we take a look at the lightweight Android emulators, let’s get a good understanding of such software and why do you need one.

Android is open-source software. The open-source nature of Android gives opportunities to the developers to mold this ecosystem the way they want. The Android Emulators are typically the Virtual Android Devices that can run on any Windows or Mac-powered computer.

Google itself provides the Android SDK Tools which have the Android Emulator inside. The basic purpose of emulating Android on a computer was to allow the app developers to test their applications. Android Virtual Device environment allows the developers to select the hardware and software environment to make suitable devices for their applications. The Android Emulators give a real-Android device experience to the developers. They can emulate incoming calls, text messages and almost every single operation that they would carry out on a real Android device.

This concept was taken up by different companies that later on came up with the emulators that required the users to do the least. One such example is the BlueStacks App Player which was released back in 2011. BlueStacks happened to be a complete package for those who just wanted a straightforward Android instance on their PCs without going through any complexity.

Now that you have understood the purpose of the existence of Android Emulators, you must be wondering why an average user needs an Android Emulator? Well, the answer lies in the evolution of the tools. Over the past decade, the Android Emulators have evolved in such a way that users now prefer to run most of their Android apps on the computer instead, and of course, they should be doing it because it’s way cool. Let’s understand how these tools can help you.

Why do you need an Android Emulator?

Here are the reasons why you would want to need an Android Emulator.

The most popular Android Emulator, BlueStacks has been updated to version 4.1. This latest version is compatible with both the Windows and macOS. The BlueStacks 4.1 fixes several issues that existed in the emulator for years. It brings a smoother UI. The BlueStacks 4.1 isn’t resource hungry either. The previous versions of BlueStacks are obsolete now. BlueStacks has a very nice UI. The moment you run BlueStacks on your Mac, you find a screen showing you the application suggestions, application tabs, and a notification bar. Users can log in using their Google Account which gives them access to the Google Play Store. The BlueStacks supports all the applications that exist in the Google Play Store. Since the BlueStacks is pretty old, it did not have so many options like Keyboard mapping, multi-instances etc. It tops our list because it is still active for Mac and still the best in business.

Make sure to check out: Download PUBG Mobile KR for PC and Laptop

BlueStacks has some hardware specifications. This is what it requires on a Mac.

BlueStacks 3 also has the APK installation button to install the APKs directly on it. It comes with the Google Play Store preloaded. The BlueStacks 3 is way lighter than its predecessors. It is the best option if you want to play games or run communication applications like WhatsApp for PC.

Following are the BlueStacks 3 system requirements. Let’ take a look at some BlueStacks alternatives now.

Nox App Player by BigNox is among one of the best and lightweight tools. If you are worried about your PC hanging again and again because of the emulator, you can give a try to the Nox Player in order to get rid of such an issue. The Nox Player is based on the Android 7.1.2 Nougat. It works on both the Windows and Mac ecosystems.

Nox Player focuses on gaming. The company has optimized this player to run all the resource-heavy games. It is the best choice for FPS lovers as well. The tool allows the players to map the keys according to their liking. Nox Player allows using an external controller as well. It has the multi-instance feature if you want to operate it in several tabs. Nox comes with the Google Play Store and all other basic Google applications pre-installed. I particularly like the Nox Player because of its Vanilla Android-like UI. It completely looks like a real Android tablet running inside your computer.

Following are the system requirements for NoxPlayer. The Genymotion is the best choice for App Developers. Genymotion gives the freedom to select the Android device during the setup. The application developers can emulate any Android device with the help of the Genymotion emulator. It runs Android as a service either in the cloud or right on your desktop PC. Genymotion is free for pesonal use. The tool is premium for developers.

MEmu, as the name pretty much suggests it, is an emulator for gaming geeks. Whether you want to enjoy the HD graphics of a game, experience its sound effects on bigger speakers, or simply want to run games because you don’t have an Android phone, the MEmu is not going to disappoint you. It is a lightweight Android emulator. It is also based on the Android 7.1 Nougat. MEmu performs up to the mark for almost all the resource-hungry games. The games like Asphalt 9, PUBG Mobile, Fortnite for Android, and Rules of Survival have been found running smoothly on this emulator.

MEmu is not available for Mac. It only works on the Windows OS. These are the official system requirements for MEmu. 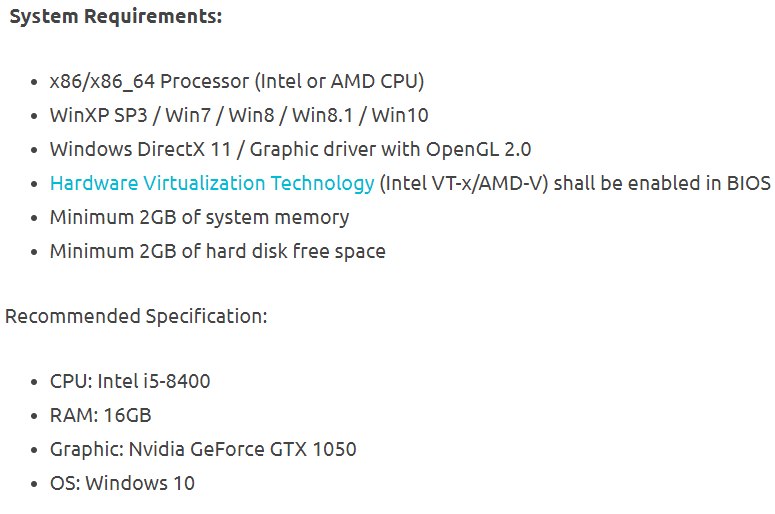 These are the Remix OS Player system requirements.

Just like Nox Player, MEmu, and Remix OS Player, Andy’s focus is also on gaming. Andy’s mission is to give the users the best possible gaming experience on a computer. Andy utilizes the graphics of a computer to produce the best output for any game running on it. For a few years, Andy ran on one version of Android which happened to be its downside. Just in April 2018, the company updated Andy to Android Nougat. The features that most of the Android App Players lack or they charge for them, Andy provides all of them for free. For example, take a look at this chart.

These are the system requirements to run Andy on a computer.

This is yet another player for gamers. The KOPlayer runs on the Windows operating system only. It lays out a smooth platform for all the Android games to run on your computer. The KOPlayer is built on the Android x86 Architecture. It supports OpenGL & hardware acceleration as well. The KOPlayer also runs multiple instances. It allows the users to run multiple accounts. The video recording feature in KOPlayer is one of a kind. It allows keyboard mapping and also supports a remote controller. Almost all the applications available in the Play Store run in this player. Bliss is not a typical Android emulator. It’s basically a completely different OS born out of a custom ROM for Android. Bliss for computers is based on the x86 architecture. It can run on any PC, Laptop or Tablet that uses the UEFI boot. The Bliss supports the devices powered by the CPUs from AMD, Nvidia, Qualcomm, and Intel. The best part of this player is that it is based on the latest Android 8.0 Oreo firmware. Bliss, in fact, is the only player to be based on the Android Oreo.

To learn more about bliss, visit their official page.

So, that’s all with the list of lightweight Android Emulators. The emulators mentioned above will give you the best possible performance. Another thing to keep in mind is how much trustworthy an emulator is. All the emulators mentioned in this post are hand-tested and found completely safe and sound. Enjoy the games in stunning resolution and run all of your desired applications on the computer now.

If you have any other option in mind, feel free to drop it in the comments section below. In case of queries, feel free to reach out to me.