The reason why there are so many apps available for Android, is because of its open source. It open source nature and great response from users encourage the developers to create best apps for it. There is a custom Mod for every stock app in Android, thus you ca replace anything you want even the most important part of OS, Kernel. But there are some apps which are paid and you need to use money to get either the whole app or to unlock all the features of app. When it comes to 3rd Party Keyboard app, Swiftkey is the best one available till now, 15 days of free trail and after a payment of $3.99 you can get it for a life time.

Today we will show you another Keyboard that is being considered the best among all Keyboard apps. TouchPal X Keyboard is reaching towards the top because of its unique and amazing features and the best, it is totally free. I, Myself was the fan of SwiftKey Keyboard for more than a 16 months, but then I heard about TouchPal X from a Friend and thought to give it a try and I loved it, it perfectly match with Hangouts and the theme I am using on My Phone.

One of the best features of TouchPal X is that it doesn’t only give you the suggestion on top but also on different letters to create the best word for you. Other features include:

Highlights that will give you the main idea why TouchPal X Keyboard is the best:

I believe I have told you enough, now it is all up to you to find out other hidden features of TouchPal X Keyboard. 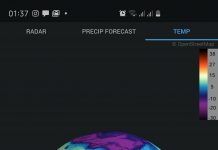