2017 marks one decade of Apple producing the remarkable iPhones. To celebrate this milestone, Apple is working on the ‘radical redesign’ of iPhone to be launched at the momentous occasion. Tim Cook and his team are working on challenging themselves to produce a device that showcases why iPhone is one of the top smartphone brands globally. Even though iPhone 7 was just unveiled two months ago and people have still not gotten their hands on the nifty device, rumors regarding the next iPhone have started making rounds. A report from Bloomberg suggests that the next iPhone is already under development in Apple’s office in Israel. The company is not leaving anything to chance and is all set to wow people next year.

Technically, the iPhone should be named iPhone 7s as iPhone 7 was launched this year. Everyone knows that Apple brings major upgrades to the iPhones every 2 years. As the company plans to bring some radical changes in its features and design philosophy, there is a greater probability that the next device will be named iPhone 8. Usually devices with S models are given incremental upgrades and in 2017, the company is planning on going all out, hence their jump to iPhone 8. There are also reports that the upcoming device maybe named iPhone Pro or The iPhone.  The rumors also suggest that three variants of iPhones are under development at the moment, which will be iPhone 8 and 8S and the premium iPhone 8. What name the upcoming iPhone ends up with will become clear in the coming months. 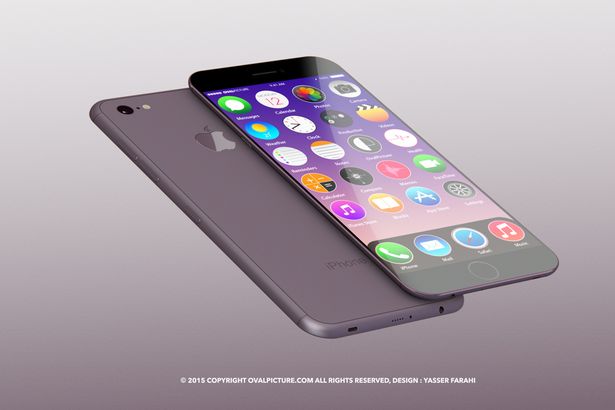 Different reports out in the market claim that 2017 will be that year when Apple equips iPhone with an OLED display. This fact can be further confirmed by the fact that Apple has contracted Samsung to make OLED displays for their devices. Along with Samsung, Sharp and AU Optronics will also provide OLED panels for the next generation iPhone. To date Japan Display was equipping the iPhone with the display panels but the company does not have the technology to develop the OLED panels.

OLED displays have some major advantages over the usual LED display. An OLED does not require the use of a backlight that is used in an LCD. In addition, the panel is energy efficient as it has a lower power consumption. Maximizing the battery  time is one of the major concerns among consumers and if a display can provide them with just that it is a win twin situation. The image quality the OLED has is amazing which provides higher contrast ratios. The use of the OLED also gives confirmation to the rumors that Apple introduce an edge-to-edge curved display for iPhone 8. As the OLED panel is flexible, Apple will up the ante and go ahead with a curved display. Rumors also hint to the fact that the company is also working on increasing the screen-to-body ratio. This hints to the fact that the upcoming iPhone (or one of them) will have a full screen display.

Forbes in their recent report have confirmed that Apple will be unveiling 3 iPhone’s in 2017. The iPhone Pro with a 5.5″ or 5.8″-inch display will most probably end up with an OLED panel and a full screen edge-to-edge curved display. The rest of the two iPhone variants will vary in size having a 4.7″ and a 5.5″-inch display and will make use of TFT-LCD. The two major reasons why Apple will not use OLED displays for all of its variants are : i) the suppliers cannot produce the quantity of panels required by the company and ii) uniqueness, how will they create a differentiation between the three variants unveiled. Apple has benefited immensely from Samsung’s Note 7 disaster. Their iPhone Pro with an OLED display and full-screen curved display aims at courting the high-end phablet users. One thing that works in Apple’s favor is the history of producing impeccable products.  With their 10 year anniversary they are going to reinforce this fact

As mentioned earlier that Apple will unveil an edge-to-edge full screen curved display, this means that the Home Button will be given a boot. With iPhone 7 we saw that the developers had worked on removing the click option, so for the next upgrade this makes sense. Mark Gurman claims that:

“Apple is already at work on a major redesign of the iPhone for 2017 that focuses more heavily on the display by removing the Home button.”

Where will the functions of the home button go? Well the Touch ID sensor will be integrated into the display. The same is expected to happen to the front facing camera and the speaker. Well this is going to be a welcome upgrade as critics have been after Apple for getting rid of the button which feels old school and introduce something new. Apple did file a patent application for a fingerprint sensor embedded in the display back in 2015, maybe with iPhone 8, we may look at the actual application of the concept.

Apple will be equipping iPhone 8 with A11 chipset produced by Taiwan Semiconductor Manufacturing Company (TSMC). The A11 chipset will be produced using the 10 nm FinFET process. This is a logical choice as Apple’s rival Samsung is also producing and making used of the Exynos 8895 and Snapdragon 830 chipset for Galaxy S8 which have been produced using the 10 nm method. The A11 chipset will reduce the power consumption and increase the speed of processing by 20%.

Apple is reportedly working on developing a long-range wireless charging technology. This means that the device does not need to be connected to any physical device for charging. This seems like a far fetched concept at the moment , but Apple has been working on hiring the best experts in the past few months to work on his project. If they are successful in implementing this concept, this will be another feather in their cap. Foxconn, Apple’s partner in this venture is testing this technology, we will have to see whether it is part of the next generation iPhone or will it be launched later on. The updates coming in the next few moths will clarify what Apple is up to in this regards.

Apple made us of the dual camera with iPhone 7 Plus which was a massive success. The use of a dual camera means that two lens are used for enhanced image processing and better focus. This feature will be making a comeback with the 5.5-inch iPhone 8 and the iPhone Pro. The third variant will have the standard camera as it is seen in iPhone 7.

The rumors making rounds about the next iPhone also claim that it will have advance biometric features. Apple is working on an Iris Scanner that will provide increased security to its devices. Xinetic is providing Apple with iris scanning chips. It is still unclear whether Apple will have this feature all ready for use in their device. They cannot compromise the integrity of their devices by a faulty feature.

What about the price of the new iPhone? With so many new features coming on board the next generation iPhone, expect the price point to increase as well. The three variants will according to their features have different prices with iPhone Pro being the most expensive out of the three due to its features.

It is a bit early to speculate on the release date for the new iPhone but when has that stopped us from predicting. Going by Apple’s iPhone launch patters for the past few years, we will be looking at the new iPhone 7s or the iPhone 8 in the first half of September, 2017. Expect a spectacular event from Apple showcasing and celebrating the production of innovative iPhone’s for the past 10 years. So, are you excited for the next iPhone and what features are you looking forward to?