Xiaomi is yet to release the Android 9.0 Pie based update to its devices. But a lot of Xiaomi devices are already getting custom ROM ports based on Android 9.0 Pie. The Xiaomi Mi 5 is one of the popular devices from Xiaomi and it’s inevitable that it receives the latest custom ROMs. The XDA developer bgcngm has already released the Lineage OS 16 ROM based on Android 9.0 Pie. As it will take quite a time before the official Pie update from Xiaomi, you can try the latest Android features by installing Lineage OS 16 ROM on Xiaomi Mi 5 smartphone. The Mi 5 smartphone is power-packed with the Snapdragon 820 CPU paired with Adreno 530 GPU and possess a 3/4 GB RAM based on the storage variant. The screen is a standard Full HD (1080 x 1920 pixels) with 16:9 ratio and 428 PPI pixel density. On the camera end, the Mi 5 boasts a 16 MP rear camera and a 4 MP selfie camera. It is backed up by a 3000 non-removable battery which would last a day on moderate usage. The device was launched with Android 6.0 Marshmallow out-of-the-box but an upgrade is available to Android 8.0 Oreo. Now, you can update it to Android 9.0 Pie using Lineage OS 16 ROM.

Lineage OS 16 ROM bring stock Android experience to your smartphone. It is based on the latest Android 9.0 Pie and includes the general features of Lineage OS. The ROM contains little or no bloatware and gives the best performance. The LOS 16 ROM for Mi 5 is still in the early build stages, so you might expect some bugs. As of now, the only feature that is missing is VoLTE which is a great deal for many users.

Apart from VoLTE, most of the major features still work. Also, a majority of the XDA users have reported the ROM to be working great. So, if you’re interested, below are the features that are working and missing from the current build.

If you have made up your mind to try this ROM on your Mi 5, follow the below instructions carefully and your device will run Android Pie in a few minutes.

Download the Gapps and Lineage OS ROM for Mi 5 to your device’s storage.

That’s all. The first boot will take some time as it needs to build cache. Once the device boots up, you can see the Android Pie setup screen. 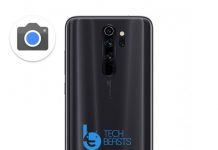