Introduction: Samsung’s Experimented Note series that turned out to be a trendsetter, has got a new family member recently. The giant Galaxy Note 3 has got an elegant look, a better design and a premium feel in hands. Boasting off a 5.7-inch Full HD display and an improved S Pen Stylus, which is not just an S Pen now but has changed into a screen digitizer. With the Air Command feature, Its small button magically communicates with the device and lets you operate it by hovering over. Of-course the S-Pen stylus is the exclusive feature of the Samsung’s Note series.

Users can choose either a Exynos 5 or a Snapdragon 800 version Note 3. Samsung has taken the credit of introducing the USB 3.0 in a mobile/pocket device for the very first time.

Samsung pulled the curtains off from it’s next generation phablet the Galaxy Note 3 at the IFA event held in Berlin on 4th of September, 2013. With a lot of improvements, the phablet  is warmly welcomed by the users and has eventually beocome the best phablet available on the market.

The innovation in the Galaxy Note 3 requires some serious attention. Samsung has smartly improved the phone’s look first of all taking the criticism about the design and build quality first of all. Under the hood this giant monster has got a 5.7-Inch Full HD Super AMOLED display with 386 ppi, that is just awesome. The S-Pen stylus has been revamped, the S-Note app has been upgraded. Features like Air-Command have been introduced for the S-Pen having Pen-Window, S-Finder etc. Boosted up processor, huge RAM, and USB 3.0 are there to add to its innovation.

Here is the Galaxy Note 3, getting unboxed by Techbeasts. Showcasing the wooden-type brown eco friendly box, 2A charger and microUSB 3.0 cable and earphones.

Being criticized over the plastic body and the same old design, on a serious node Samsung went with the new design all the way. The note 3 boasts off a premium look and elegant design. Samsung has sharply changed the plastic back of the phone into a stitched leather look and feel, although it’s plastic but what matters is it’s look and feel that is grippy and nice. Samsung has also shown the smart work in the display department by increasing the display from 5.5” of the note 2 to 5.7 with in the same frame. Measuring at 6-inch of height, 3.1-inch wide and 0.33 mm thick, this new monster is merely a hair bigger than it’s predecessor.

Alongside the display size and dimensions, Samsung has also reduced the weight of the 3rd generation Note. The device weighs at 168 grams that is a huge improvement as compared to the size of its predecessor that was weighed at 183 grams. This is by far the most sleekest Note, but still falls behind the time’s smartphones e.g HTC One, Samsung Galaxy S4 in the sleekness department.

The design department has got a lot of improvements. Specially, the oval frame of the Galaxy Notes and Galaxy S smartphone, that Samsung skipped this time and brought up a new Rectangular chasis ringed with flashy chrome riged edges, and as mentioned earlier the fake stitched leather back that is hyper-glazed and glossy,  adds charm to its look.

The S-Pen stylus has received efficient updates. The capacitive buttons now work with the S-Pen stylus, so you can navigate on your Note 3 using the S-Pen only if you wish. New shortcuts, and features like Air-Command as mentioned earlier have been added.

The gorgeous display being sported on the Note 3 is not less then the others at all. Note 3’s 5.7 – inch Full HD Super AMOLED display, having 385 ppi with 1920 x 1080 pixels gives you the best of the graphics.  The display simply outdoes the displays of the smartphones like HTC One, Samsung Galaxy S4 and iPhone 5 and of -course the previous note series phablets as well.

Below the 5.7-inch FHD display screen with 386 ppi and 1920 x 1080 pixels, it has got the typical capacitive keys with the home button. Below is a USB 3.0 port that has been introduced for the first time in a mobile device. The loudspeaker grill has been shifted from the back to the bottom besides the mic, that’s a good move by Samsung. Besides the USB 3.0 port and loudspeaker, the S-Pen holder is there.

Above the display it has got a 2MP front facing camera that is capable of recording 1080p videos. Besides the camera there is proximity sensor, ambient light sensor and the motion sensor that is responsible for air gesture feature. 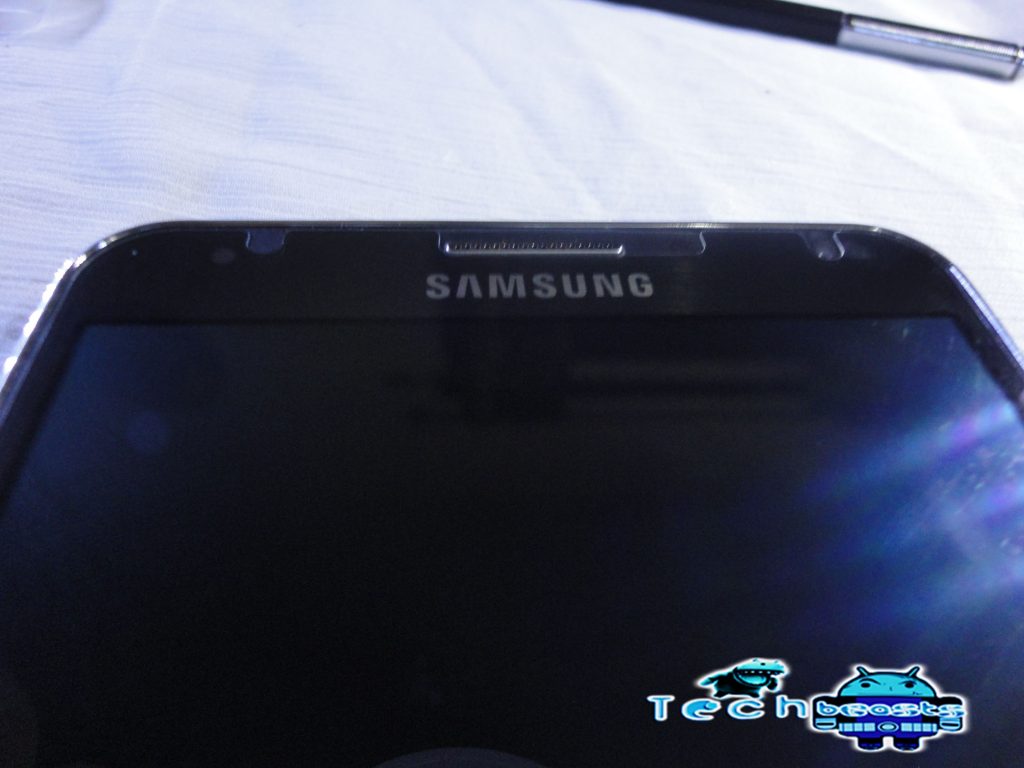 The sides as usual have the Volume Up, Down keys on the left, while the power key on the right. On the top there is a 3.5mm audio jack besides another mic and the IR blaster, that Samsung recently introduced in the Galaxy S4 and is responsible for the IR remote feature using Samsung Watchon.

At the back it has got a 13 MP camera sensor and a flash under it. Under the cover it has got a huge 320o mAh battery along the microSD card and SIM card slot. The note 3 comes with 32 GB / 64 GB internal storage space, and supports a microSD card upto 64 GB. The Samsung Galaxy Note 3 is powered up with Samsung’s Exynos 5 Octa clocked at 1.9 GHz or Snapdragon 800 Quad Core CPU clocked at 2.3 GHz. The device is packed up with 3 GB of RAM. The Exynos version has Mali GPU while the Snapdragon one has the Adreno 330 GPU.

The S-Pen, an essential part of the Note series is there in it’s compartment at the bottom of the Galaxy Note 3. The S-Pen is same in size to that of the Note 2’s S-Pen. It has got a small button below the center that plays role in screen capturing and other features. The top of the S-Pen is groovy, just like the Note 3’s sides. It is made up of plastic, and is a bit flattened.

Based on my personal observance, there are hardly a few people that really use the S-Pen. It seems like Samsung took this part seriously as well this time and introduced new features and shortcuts for the Galaxy Note 3’s S-Pen. As stated by Samsung, the S-Pen has been revamped in the Galaxy Note 3 and Galaxy Note 10.1 2014 edition to give the users, a refinement of the existing features of the previous Galaxy Notes.

We’ve been talking about this exclusive feature of the Galaxy Note 3’s S-Pen, it’s time to know what is it actually. The Air-Command is a feature added to the S-Pen’s software. The Air-command pops up by simply pulling out the S Pen or by pressing the small button on the S Pen and hovering it over the screen.

There is S-Finder, Pen Window, Action Memo, Scrap Booker and Screen Write feature in the Air-Command. I find this feature pretty cool. Specially the Pen Window that allows you to use the available applications in a small window above your other running applications, it is easy to minimize and maximize the Pen Window applications.

The S View is improved as well. That is a lot bigger than that of the S4’s S View. Note 3’s S View allows the users to read the messages as well unlike the Galaxy S4’s. The S-View also allows the users to use S-Pen. Please note that the S View cover is an extra accessory and does not come inside the box.

Out of the box, the Galaxy Note 3 runs on Android 4.3 Jelly Bean and the TouchWiz UI. The lockscreen widget feature is there, that is same to the one introduced by Samsung in Galaxy S4’s Android 4.2.2.

The other upgraded software features include:

Samsung also introduced its very own security feature named as Samsung Knox in order to ensure the user’s security. Samsung Knox is approved by the government, and is keeps device highly secure.

Let’s have a look at the software upgrades:

The Camera on the Galaxy Note 3 has is improved. The 13 MP sensor at the back now supports 4K video recording and the front facing Camera ranged at 2 MP supports 1080P video recording.

The 13 MP camera is quite good to take the pictures of up to 414128 x 3096 pixels.  The new features introduced in the Galaxy Note 3 camera include Surround Shot that takes a sphere like photo. The other scenes, features and modes are same as that of the Galaxy S4’s camera, but are a bit improved.

Camera interface is based on the Galaxy Camera’s interface.

Showcasing a few pictures taken with the Galaxy Note 3 SM-N900: 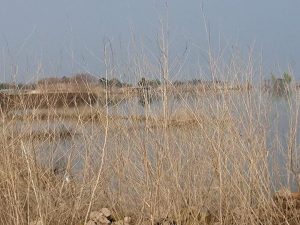 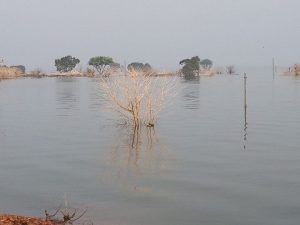 The Samsung Galaxy Note 3 LTE – Snapdragon 800 version supports 2160p video recording that is also known as Ultra HD or 4K video recording. It translates to a video of 3840 x 2160 pixels or in simple words it is 4 times higher then the 1920 x 1080 pixels Full HD clips.  The 4K video recording doesn’t allow the users to use Dual shot or capture the screen during the recording.

The 4K video recording carries 47 Mbps bitrate that is almost 3 times higher than that of the 1080p videos, while the audio is recorded at a bitrate of 123 kbps.

The 4K video recording gets slow down if zoomed more than 2x, while the 1080p recording allows to zoom up to 4x.

Before we head to the conclusion, Let’s have a brief look a the Specs, Pros and Cons of the Galaxy Note 3:

Compiling up the review, the confusions should go away if you are going to buy a new device and selecting one for yourself at the moment. The Galaxy Note 3 is the device you should get. The perfect combination of the Hardware / Software is boasted off in the Samsung Galaxy Note 3.

Samsung has credited itself with the new features once again with the Galaxy Note 3. The price is reasonable as well as Samsung cares for the customers. As compared to other devices like LG G2, Xperia Z1 / Z Ultra or the upcoming HTC One Max – the Galaxy Note 3 is far better and will simply outdate all others.

The S-Pen stylus is the thing you won’t find in any other smartphone or phablet, give Samsung its credit. It is true that the phablet is a little big, but believe me its not hard to put it into the pocket as i keep it in my jeans all the time. The camera, display, software, hardware – everything is improved and provides a better user experience. Samsung has done a good job in the battery department as well, so if your device runs out of battery while you are travelling then the Galaxy Note 3 may not disappoint you.

That’s all for now. We would love to listen about the Galaxy Note 3 from you. Feel free to leave a comment below. Thanks All