At this time of the year, all the Android smartphone giants are done bringing up their latest flagship devices. Few dominated the Android world, while few were just ordinary. The tech world has seen a lot of innovation in the year 2014 for sure, and there’s nothing less to have a look at, or choose from, but a serious conflict may arise when you have to choose one of the smartphones and you’re stuck in deciding the greatest Android smartphone to go with. If that’s exactly the case with you, you may stop thinking hard as we have enlisted the top-notch and best smartphones of the present time that may make it easier for you to pick one up. 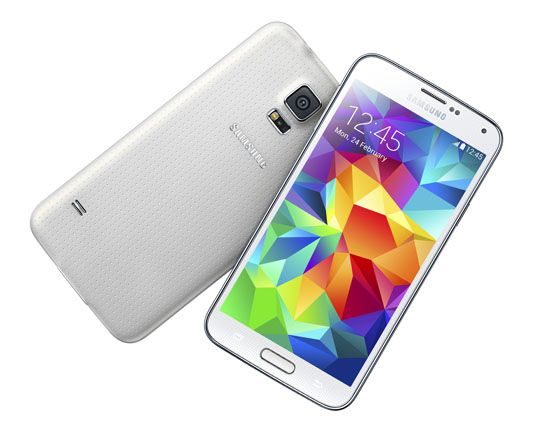 Samsung’s latest and current flagship device, the Galaxy S5 was announced on February, 24 and released in April 2014. The latest Galaxy device, as always helped Samsung once again to sit atop as it boasted off a number of new features that the fans may fall far. It’s heavy spec sheet helps it to stand well again its competitor. S5 sports a beautiful 5.1 inches full HD display with 432 ppi. At the back, there’s a 16 MP shooter while a 2.1 MP shooter is on the front. Samsung has worked hard in the camera department this time, there are features like PDAF, Selective focus etc  that are usually found on the DSLR cameras. Samsung has powered up the device with Qualcomm Snapdragon 801 Quad Core CPU Clocked at 2.5 GHz accompanied by Adreno 330 GPU, while some variants come with different processors as well. There’s a 2 GB RAM inside the device and a massive 2800 mAh battery is placed under the hood to give life to this device. To make this device a first choice for the users, Samsung has introduced the fingerprint scanner, that also works with Paypal and some other applications. The phone is IP67 certified, that makes it water and dust resistant. Galaxy S5 runs on Android 4.4.2 KitKat  with Samsung’s new and improved TouchWiz UI out of the box. That’s quite a lot right? Well, that’s why we have listed at number 1.

LG was left b

ehind in the race of introducing its flagship device, but it finally brought up the G3 in May, 2014. After seeing G3, LG convinced us to admit that it took the rivals seriously and now its in-line to give them a tough competition. G3 flaunts a QHD display, sized at 5.5 inches with a resolution of 1440 x 2560 pixels and 534 ppi display. If you’re wondering how can we call this a smartphone with such a big display, you may stop it because LG has just made it possible as G3 fits in the hands perfectly being slim. LG has used a 13 MP shooter at the back, but this is not an ordinary camera anymore. G3’s camera is accompanied by laser auto-focus, introduced by LG for the first time in a smartphone, which makes it extremely fast to capture the pictures. Secondary cam is ranged at 2.1 MP. LG has used the same CPU in G3, as that of the Galaxy S5 that is Snapdragon 801 Quad Core clocked at 2.5 GHz and also accompanied by Adreno 330 GPU, but the phone surely takes lead when it comes to RAM as it has a massive 3 GB RAM inside. There’s a massive 3000 mAh battery placed under the hood to power this device up. LG G3 also runs on Android KitKat out of the box with LG’s latest UI. After the Galaxy S5, this device is the best choice to go with at the moment.

HTC One M8 sports almost the same specs as the above two devices, but takes the lead when it comes to the build quality and design. M8 has Aluminium body, that gives it a premium look and actually makes it a premium device, while the specifications include 5.0 inches full HD display with 441 ppi, there’s a dual 4 MP camera at the back which makes this device unique and a 5 MP shooter is fixed on the front. HTC has also used Qualcomm’s Snapdragon 801 CPU clocked at 2.3 GHz accompanied by Adreno 330 GPU and a RAM of 2 GBs is there.  One M8 has a battery of 2600 mAh. The device runs on Android KitKat with Sense 6 UI out of the box. If you keep the beauty of a smartphone at priority 1, then HTC One M8 is surely for you.

Sony pulled the curtains off from its latest flagship, the Xperia Z2 at MWC, 2014.  This device has a 5.2 inched full HD display with 424 ppi. Processor remains the same here as well, i.e Qualcomm’s Snapdragon 801 Quad Core CPU clocked at 2.3 GHz accompanied by Adreno 330 GPU. A RAM of 3 GBs is there and a massive battery of 3200 mAh is placed under the hood. Sony has worked hard in the camera department and with a number of new features and improvements, a 21.7 MP shooter is fixed at Xperia Z2’s back and a 2.2 MP on the front. Xperia Z2 also runs on Android 4.4.2 KitKat out of the box. Besides this heavy spec sheet, this device also becomes a choice because of its IP58 certification that makes it water and dust proof. Sony has been treating its customers pretty much good, so going with Xperia Z2 won’t be a wrong attempt at all. We place this device at number 4 in our list.

Released last year, the Galaxy Note 3 is a pure beast. The device flaunted a beautiful and huge 5.7 inches full HD display with 386 ppi. Samsung introduced a number of new features that were eye-catching, these include Air Command and some others. A 13 MP camera is fixed at the back and a 2.1 MP on the front. Galaxy Note 3 has a faux leather back, that makes the device quite beautiful and also helps it to become a choice among the users. Samsung powered up with device Qualcomm Snapdragon 800 CPU or its very own Exynos CPU accompanied by Adreno 330 GPU. Galaxy Note 3 was an early device to come up with a 3 GB RAM. There’s a 3200 mAh battery to add life to this device. Galaxy Note 3 ran on Android 4.3 Jelly Bean out of the box, but Samsung has updated it to the latest Android 4.4.2 KitKat as well. And not to forget, Galaxy Note 3 has an S-Pen that actually enhances the user experience and helps more than a lot, the only thing that all the smartphones lag in and Samsung takes the lead in. S-Pen’s functionality has been enhanced as well, so if you’re not looking for a latest device, Galaxy Note 3 beats all and is the best choice. The device stands on the 5th spot because of its age.

Nexus devices are greatly welcomed by the users because of the price they are offered at, and because of the vast development. Google, in collaboration with LG, brought up its latest flagship, the Nexus 5 last year. The device stood well in competition with its rivals of that time. Specifications include a 5.0 inches full HD display, Qualcomm Snapdragon 800 CPU clocked at 2.3 GHz and Adreno 330 GPU, a 2 GB RAM, 8 MP camera with OIS at the back and a 1.3 MP on the front while the battery 2300 mAh. Nexus 5 ran on Android KitKat,  and is upgradable to the latest version, Android 4.4.4 KitKat as well. If you do not want to spend a huge amount and empty your pockets on a latest and high spec smartphone, then Nexus 5 is the best choice as it can perform all your tasks without any hiccups here and there.

The most hyped smartphone o

f the year 2014. OnePlus One’s rumors were enough to dominate the Android smartphone world and it actually did as it came out. The phone has some serious top-notch specifications, not something unique, but the matter gets serious when it comes to price at what the company is offering this beast. OnePlus One has a 5.5 inches full HD screen with 401 ppi. There’s a 3 GB RAM, a 13 MP shooter at the back, 5 MP on the front and the device is powered by Snapdragon 801 CPU clocked at 2.5 GHz with Adreno 330 GPU, and 3200 mAh battery is placed under the hood. These specifications surely give a tough competition to all the smartphones we listed above, but becomes an obvious choice when you come to know that you can get this amazing smartphone for $300 only. OnePlus One isn’t available in the markets at the moment, but the manufacturer aims at bringing it up sooner. So, if you don’t want to spend too much on a smartphone just because of the manufacturer name and popularity, you may go for OnePlus One as it isn’t a bad choice at all.

Chinese manufacturer Huawei has been pretty good in the smartphone world at the moment. Huawei’s smartphones are becoming the user’s choice because of their design, build quality, heavy spec sheet and the features they have to offer, that are not less than any mainstream manufacturer’s flagship device. Recently, Huawei introduced the Ascend P7, that is an ultra slim smartphone with 5 inches full HD display. The device is powered by HiSilicon Kirin 910T Quad Core CPU clocked at 1.8 GHz accompanied by Mali-450MP4 GPU and a RAM of 2 GB. Huawei has done some serious work in the front came department, Ascend P7’s stands at 8 MP while the shooter at the back is of 13 MPs. Battery isn’t bad either, its massive 2500 mAh. The device stands at the 8th and the last spot in our opinion.

That’s all! In case we are missing something, feel free to mention it in the comment box below and we will get back to you quickly. Thank you all.