Back in the days, everyone tries to make their own custom Ringtones. But nowadays, it is not a thing, there are dedicated apps which provides you with the latest ringtones. However, if you are among those who want to make their own ringtones, then in this post in which you will find 5 Best Ringtone Maker Apps for Android.

Using these apps you can make ringtones of any song, theme, music, etc. You will find hundreds of ringtone maker apps on Google play but not all of them are what they say. Most of these apps contain Ads, Spam content, and malware. But no need to worry because we have tried a number of Ringtone Maker Apps for Android. And after carefully reviewing them, we picked 5 of them. All of these apps will allow you to cut and join music, songs that way you want. Moreover, few of these apps have voice recording function in it, if you cannot find the song you were looking for, you can record it to make a ringtone. Let’s get started now.

Before we proceed, make sure you have the MP3 file whom you want to make your ringtone. None of the following apps support any video file, you if have a video file make sure to convert into MP3.

In order to make a ringtone out of an MP3 file, either you can add values or you can use built-in trim or crop feature. Moreover, you can also merge but without drag feature. Once you are done, you can add it as your ringtone. The only downside to this app is, you cannot save your custom ringtone on your device. Also, since this app is free, you will see a lot of Ads and Pop-up while using it.

Ringtone Slicer FX is the second in our list. It’s a free app, that is why it has Ads. The best feature of this app is the built-in file manager. The interface is not attractive but since it has its own file manager, things get easier. regardless of the old hag interface.

Editing on Ringtone Slicer FX is fun, they have added zoom in and out feature, which makes selection easy & accurate. This app only supports MP3, WAV, and AMR. But that is not an issue at all, the main thing is, you can use it easily and make ringtones for your Android devices.

Also, if you want to add more details and effects to your ringtone, you can use equalizer settings. The only downside to Ringtone Slicer FX is limited format support.

On number 3, it’s Ringdroid. I have heard about this app back in 2008 and since then it’s still open source. But when it comes to functionality, you can bet your cards on it. Since it is open source, you won’t be bothered by Ads and Pop-ups. By default, you will find more audio files then any other Ringtone maker app. It has its own built-in audio recorder and you will shock to know this awesome app has no file manager. Although, after these years, I also thought, they have added a file manager by now.

The only downside to Ringdroid is no file manager and also no built-in search feature. That would’ve been really helpful if they added it.

Timber is on number four in our list of Best Ringtone Maker Apps for Android. Originally Timber was a video editing app but now they have also added audio editing feature. That will allow you to make free ringtones for your Android device. This app is the most advanced from all the others and in features, you will find more than enough.

In their Audio Editing, they provide you with features like cut, join, merge, convert, omit, and increase and decrease the speed. Moreover, it doesn’t end here, they also allow you to convert video into audio. It means you will be able to create a ringtone from a video or a movie.

The one and only downside to Timber is, that they don’t have waveform editor just like all the other apps.

In the end, we have Ringtone Maker- MP3 Editor & Music Cutter for you. This app maybe not everyone’s first choice but it has everything, you name it and it will have that. Such as file explorer, recorder, waveform editor, etc.

Ringtone Maker for Android is a free app, that means it has Ads but they are not annoying. Editing is easy, you can set start and end time, you can zoom in and out. It also supports all the popular music format.

That’s all for now. These were the 5 Best Ringtone Maker Apps for Android. Give’em a try and let us know how was your experience. In the end, Please do tell you what you think about this article. Also, It would be very nice, If you Share this article with friends and Join Techbeasts on Facebook and Twitter. 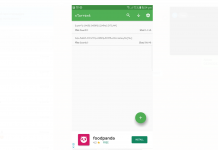