News Oppo CPH1887 spotted on Geekbench, PBDT00 and PBDM00 get through TENAA

Oppo is on the roll once again. Just recently, the company launched its F9 and F9 Pro. Right after the new F9 phones, Oppo released the R17 and R17 Pro. It looks like Oppo is already working on new phones. Two of the Oppo handsets got the TENAA certification today, while another Oppo handset was spotted on Geekbench. 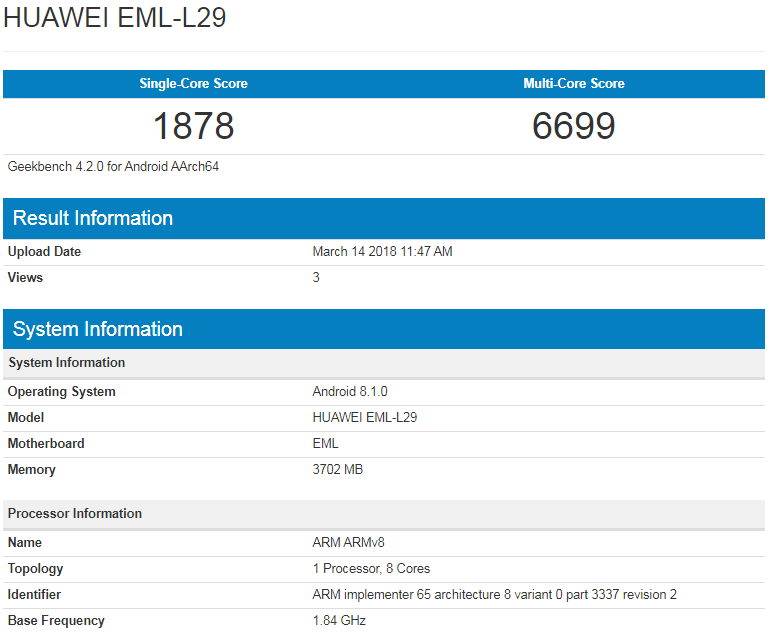 A new Oppo smartphone carrying the model number CPH1887 has been spotted on Geekbench today. The phone has put 1,817 points in single-core test and 5,930 points in multi-core test. This new phone, according to the Geekbench result, will be powered by Qualcomm Snapdragon 710 SoC clocked at 1.71 GHz. The SoC will be accompanied by Adreno 616 GPU.

The Geekbench result also shows the device to have a 6GB of RAM under the hood. The phone will run on Android 8.1 Oreo out of the box.

There is no further information revealed by the Benchmark result. The name of the device is unknown so far. The phone could be Oppo’s A or F lineup device as it belongs to the CPH-series.

The other phone, PBDM00 will have the same specifications. This phone will also have a 6.4-inch display and a battery of 1800mAh. The identical spec-sheet also suggests these be the variants of the same phone. These phones might have a different camera, RAM, and memory setup.

Don’t forget to consume this information with a pinch of salt as all of this is just a rumor. We are keeping our eyes on the latest information regarding these Oppo phones. Stay connected with us to know more about them.